Allen Crosslight is the main protagonist of PriPara: Mirai no Stories' second season. She is an amnesiac who performs "special lives" on the street with her best friend, Tessiana Hanarobei. She and Allen later get scouted by Masato to be Idols, not knowing the new dangers that lurks in there...

She is a Cool Idol who uses Cross Gear, Cross Wingz's spin-off brand.

Allen has a boyish appearance, with short, spiky dark red hair. She also has a tattoo on her left collar bone.

Inside PriPara, her hair grows up to her shoulders and the tattoo disappears.

Upon being corrupted, her hair slowly turns black and her eyes turn into a lifeless yellow. However, after hearing that Tess' voice, her right eye turns blue and her hair slowly returns back to red, but has some black strands.

After being Corrupted, she decides to tie her hair up in a short ponytail. There is also a visible black scar on the side of her head after the tie breaker battle against Alia.

Allen is pretty laid back. She doesn't mind doing stupid or tedious tasks, she'll do it anyway. She is often compared to a knight by many, due to her passionate and courageous personality, and how she handles every situation, such as comforting or giving advices to Idols, whether it's a girl or a boy. She is also really blunt, and will not hesitate to speak out her mind.

While being Corrupted, Allen goes through a mental breakdown and occasionally rages, hurting herself in the process. She also turns into an evil psychopath who resents the world, to the point she wants to destroy it with her bare hands due to its cruelty. This goes on and on until Dativa tells her the truth of her origin and what will happen in the end, making it much more worse. By then, her Corruption was complete, but it when it was "undone" by Tess, she finally revealed her real self.

The "real" Allen is extremely depressed, often frowning or having an almost-lifeless expression. She later returns back to normal, but develops a serious personality as of the result.

When Tess met Allen, she describes her as "somewhat like Alia".

Her first name, Allen, is Celtic for either harmony, stone, or noble, while Crosslight is a light positioned to illuminate the parts of a photographic subject that the main lighting leaves in shade.

However, according to Tess, Allen Crosslight means that the fair light that shines across the path of another to illuminate an lie left by darkness, but not eliminating that darkness. 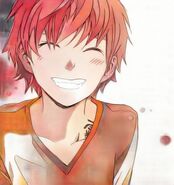 Allen's Corrupted form after hearing Tess' voice
Add a photo to this gallery
Retrieved from "https://pripara-fanon.fandom.com/wiki/Arata_Futaba/Allen_Crosslight?oldid=17748"
Community content is available under CC-BY-SA unless otherwise noted.