She has pink lace hair with silver strands. Although she is normally quite short in the real world, she gets taller when she is inPriPara and looks like a teenager.

Mabelle usually wears a princess-type Coord, but sometimes she wears a Cute, Pop, or Star-type Coord when she performs.

She is a well-known idol, and she practices hard every day since her role is the Princess. She is very serious when you look at her, which is why her fans often mistake her as a Cool person, but in reality, she really loves to play around in PriPara and trying on new Coords.

Mabelle's younger sister. She is so obsessed with idols that she is LITERALLY an idol wannabe. She often praises her sister

" We are Angelody, the divine idols!"

"You are so crazy if you ever think you'll beat me, for I am the Princess! 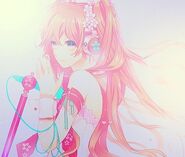 Mabelle while singing
Community content is available under CC-BY-SA unless otherwise noted.
Advertisement